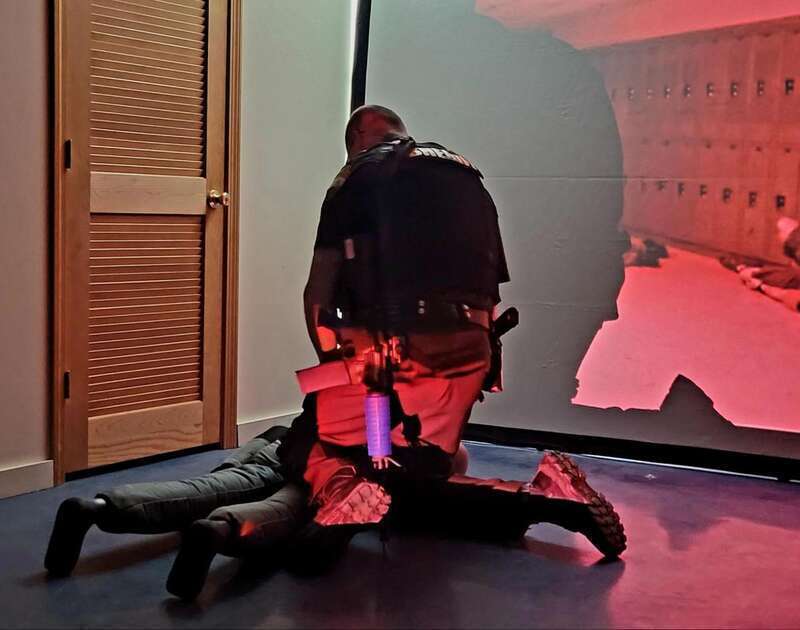 A Washington County Deputy walks slowly into the classroom of a high school cafeteria where injured people lie on white linoleum. The AR-15 in her hands feels the same as the AR-15 in her cruiser, and when a shooter jumps out and fires, she fires back, but none of it is real. It’s a training simulation taking place in the conference room of the Machias Police Department, using state-of-the-art virtual reality technology called Milo Range.

The system, which costs in the vicinity of $50,000, was purchased by Washington County Community College using funds from a Perkins Grant, and this summer is set up in Machias so that local officers can drop in for training sessions, often led by officer Wayde Carter, who teaches criminal justice and conservation law at WCCC in Calais.

“Every time an officer goes through this, it makes them better. Some of these can be pretty traumatizing, so it gets an officer ready to handle that,” says Carter, who queues up the training videos for a group of waiting officers.

Every officer wears a belt that holds the same tools they carry in real life, such as a pepper spray canister, a taser, and a handgun. When they use them in the simulation, the people on the screen respond. None of the tools are real — in fact, no real weapons are allowed in the room during training. But they lend a critical note of reality to the system.

Choosing the right thing to use and when or if to use it is a key aspect of the training, says police officer and Washington County Jail Administrator Rich Rolfe.

“That’s the biggest piece of it. [The system] can be used as a tool to assist with weapons handling, but it’s really about making the right decisions,” says Rolfe. “We’re training to develop unconscious competence.”

“This is more about decision-making training than getting the bullets on target, we do that at the range,” he says.

WCCC invested in the system as a way to enhance its Criminal Justice and Conservation Law degree programs, relatively recent additions to its course catalog.

“We brought those up knowing there was a critical need in our region as well as statewide and nationally for law enforcement-trained individuals,” said WCCC President Susan Mingo. “We’re fortunate to have the Perkins funding that allowed us to bring up the programs as well as purchase the equipment.”

In June, officers trained on active shooter scenarios, because they were front and center on everyone’s mind after the devastating Uvalde school shooting that killed 19 students and two teachers. But the Milo Range system can be used to train for almost any imaginable type of police work, from domestic violence situations, to drunk and disorderly, to burglaries.

“In many of the scenarios, force isn’t even used,” says Rolfe. “It just gives them the option, but they have to choose the right tool.”

The system will remain in Machias through the summer, returning back to WCCC in the fall when the students return to campus. Mingo credits Carter and Rolfe with making sure that western Washington County has a chance to take advantage of the Milo Range training technology.

“This is a great way for us to offer that back to the community and make sure folks are well trained,” she said. “It’s really important to us to be a good partner to Washington County law enforcement. We’re happy to do it.” 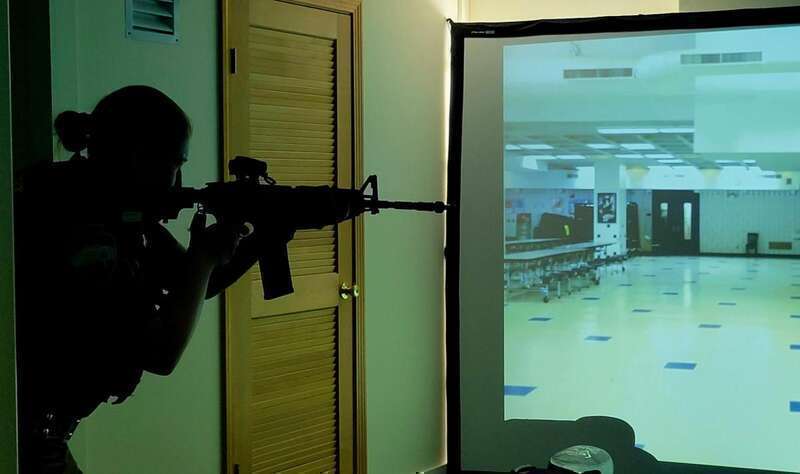 Washington County Sheriff’s Deputy Abby Allen has her weapon drawn as she makes her way into a high school active shooter scene. No live weapons are allowed into the training room, but the Milo Range weapons are designed to look and feel like the ones used in real life. Photo by Sarah Craighead Dedmon