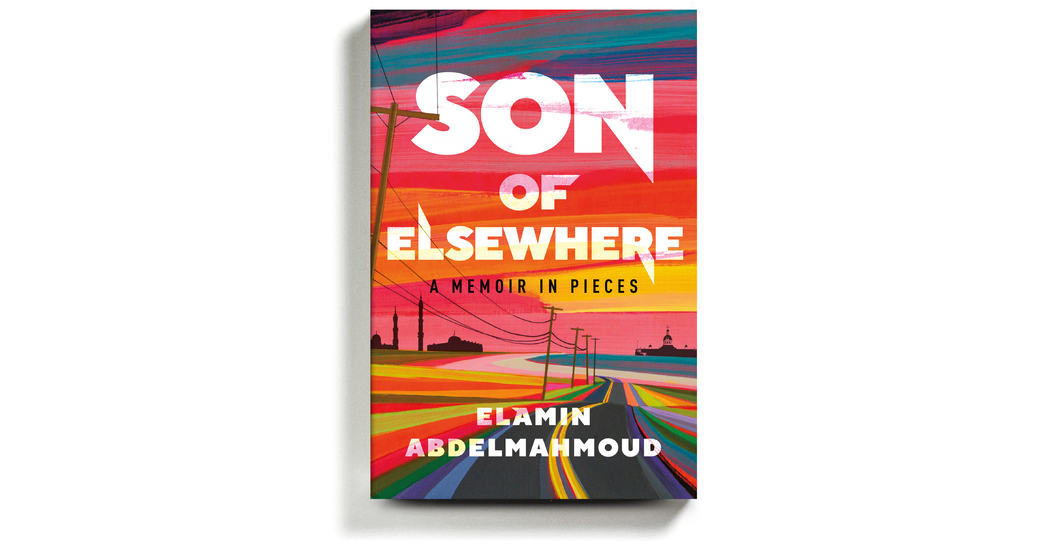 SON OF ELSEWHERE
A Memoir in Pieces
By Elamin Abdelmahmoud
268 pages. $17. Ballantine Books.

As an immigrant kid in Kingston, one of the whitest cities in Canada, Elamin Abdelmahmoud learned pretty quickly that he was Black. At first this was news to him: He had spent the first 12 years of his life in Sudan identifying as Arab — when he thought about his identity at all.

“In my corner of Kingston, the only place I saw Blackness was in the world of hip-hop,” Abdelmahmoud writes in “Son of Elsewhere,” his buoyant collection of essays, or what he calls “a memoir in pieces.” But having grown up in a conservative Sudanese family, he felt totally bewildered by Sisqo’s “Thong Song” and the music videos of Ja Rule. He paid close attention to how the Kingstonians around him talked. “I listened to the rock radio station, because 1) they spoke like the people I was trying to mimic and 2) absolutely no Ja Rule.”

This book is full of confessions like these: funny and frank, delivered in such a generous spirit that almost any reader (even the most dedicated Ja Rule fan) is bound to be won over by Abdelmahmoud’s story of trying to figure out who he was. In Sudan, his identity was a given. His father owned a publishing house in the capital city of Khartoum, and until the authoritarian government shut it down, the family had some social standing; they lived within earshot of four mosques, whose calls to prayer structured the rhythms of their days.

Immigration unsettled all of that. “Once we arrived, my parents wanted to delicately balance acknowledging that we existed in Canada and limiting my exposure to actual Canadians,” he writes. Life in a new country brought with it discomfort but also possibility. Abdelmahmoud started writing online fan fiction about professional wrestling, which “gave me permission to write and write and write until I was understood.” Televised wrestling extravaganzas offered him an excuse to hang out with his new friends in real life: “For a few hours, between the crunch of the chips and the bubbles of Pepsi and the crack of the bodies onscreen, it was as though no one in the room, not even me, had to think about the fact that I was an immigrant.”

A writer for BuzzFeed, Abdelmahmoud knows his cultural references, but he wears them lightly. A quote from Roland Barthes slips, effortlessly and unpretentiously, into thoughts about crushes and the television show “The O.C.” Abdelmahmoud recalls the night in the summer of 1998 when then-President Bill Clinton — brandishing what turned out to be questionable counterterrorism intelligence — bombed a pharmaceutical factory in Khartoum, decimating Sudan’s supply of malaria medication: “Cruise missiles aimed at a newfound source of dignity. Even Frantz Fanon would think that was a little too on-the-nose.”

Part of what Abdelmahmoud does in this book is make space — for joy and for discovery, but also for anguish and ambivalence. He weaves in some thoughts on “Season of Migration to the North,” by the Sudanese novelist Tayeb Salih, which was published in 1966 and became a touchstone in Arabic literature. The novel conveys how being colonized creates a sense of moving between different worlds without ever feeling at home in any of them. Salih was eventually feted but also flattened, “made into the singular image of An Author Representing Africa,” Abdelmahmoud writes. “To be celebrated, but in celebration be reduced to a comprehensible identity, stripped of its range, was a profound irony.”

But range can also present challenges. Too tight a tether can make you feel stifled, while the absence of one can leave you unmoored. Abdelmahmoud brings up the ostinato in music — the repeated motif that acts like “guard rails for your emotional experience during every measure of the song.” In Khartoum, his ostinato was the sound of the adhan, or the Muslim call to prayer. In Canada, as well as in this book, his unlikely ostinato is the 401 highway, the enormous thoroughfare that welcomed him on his arrival at Toronto’s Pearson Airport — “when my emotions were raw and my confusion was high” — and carried him to Kingston, a few hours east.

The 401 was his “first friend.” He remembers being amazed at its size and its speed, a ribbon of asphalt in the landscape, “a geography of grace and chaos.” The 401 brought him to visit Niagara Falls and to see his first play. The 401 allowed him to travel between worlds — or, to put it another way, to sneak around behind his parents’ backs. While living at home during college, he started dating a woman named Emily, despite his parents’ disapproval. (Whether they objected because she was white or wasn’t Muslim is something that Abdelmahmoud doesn’t make entirely clear.) “I thanked the highway,” he writes of the time when he cared for Emily while she was sick and staying a couple of hundred miles away. “I made it home in time for dinner, and my parents never suspected a thing.”

Abdelmahmoud and Emily eventually married; his father refused to meet her, let alone attend the wedding. This sounds cruel — and maybe for some people in Abdelmahmoud’s position, impossible to forgive. But part of growing up is gaining a deeper understanding of where your parents, with all of their limitations, are coming from. Abdelmahmoud begins to realize that the restrictions placed on him aren’t the sum total of who his parents are, even if his younger self understandably felt that way.

When his father eventually apologized a full two years later, their reconciliation took place at a Wendy’s off the 401. The highway is too big to contain just one metaphor; it’s like the “elsewhere” of this vibrant book’s title — neither here nor there, but the “fragile compromise” where those two places meet.